Home » Oil near $50 amid drop in U.S. rigs, disruptions in Nigeria 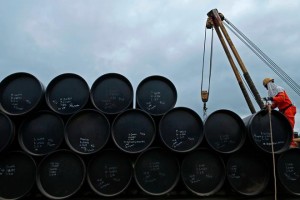 Oil near $50 amid drop in U.S. rigs, disruptions in Nigeria

NEW YORK (Bloomberg) — Oil traded near $50 after a drop in active rigs in the U.S. and further supply disruption in Nigeria.

Futures rose as much as 0.8% in New York. Rigs targeting crude in the U.S. fell by 2 to 316, after no change the previous week, Baker Hughes Inc. said on its website Friday. Explorers have dropped more than 1,000 oil rigs since the start of last year. A Nigerian militant group said it blew up three pipelines in the oil-rich Niger River delta on Saturday, the third attack in as many days, as it steps up an offensive to cripple the West African nation’s oil and gas industry.

Oil has rebounded since tumbling to a 12-year low in February amid output declines in the U.S., Nigeria and Canada. Prices climbed above $50/bbl on Thursday as declining U.S. crude supplies eroded a global glut.

Brent for July settlement, which expires on Tuesday, rose as much as 36 cents, or 0.7%, to $49.68/bbl on the London-based ICE Futures Europe exchange. The contract declined 27 cents to $49.32 on Friday. The global benchmark crude was at a 5-cent discount to WTI.