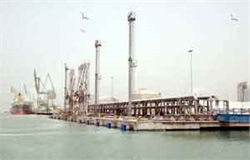 TEHRAN, March 8 (Shana) – Next year’s draft budget bill has allocated a 20-percent share from export of oil and gas condensates or 6.54 billion dollars for the National Development Fund.
The bill which is under review in Parliament (Majlis) has authorized the fund to finance 4.8 billion dollars through banks for development projects of joint oil and gas fields Iran is sharing with neighboring countries.
The fund can also support knowledge-based companies and institutions and provide financial facilities to investors from the private sector and cooperatives involved in the upstream oil and gas development projects Iran Next Year Budget Based on $35-40 Oil p/b

Head of Statistical Center of Iran Adel Azar has said that oil revenues for next year’s budget (21 March 2017 – 20 March 2018) is forecast on a 35-to-40-dollar per barrel base with production being increased up to 2.5 million barrels a daily.
Iran’s fiscal year starts on March 21.

Government Spokesman Mohammad-Baqer Nobakht has also said that 22 billion dollars out of the sum of 67 billion dollars budget is forecast to be earned from oil exports and the rest via other income sources mainly from taxes.